I just to translated this movie and as it finished, I was like…Wow.. astonishing… marvelous! The first 3 minutes of the movie start with magnificant scenes from modern Paris accompanied by a great jazz music Si Tu Vois Ma Mere! It’s a perfect presentation of Paris with its culture, literature, life-style given chronologically; Even Transportion takes place! Great job, Wody Allen! :)

Just from the opening scene, you will fall for Paris!..if you haven’t been there, Paris will turn out to be your dream city! :)

Dialogues are mostly about how adorable Paris is. Just from the first sentence of the script:

Adriana:         I can never decide whether Paris is more beautiful by day or by night.

Gil:                 …You know, I sometimes think, how is anyone ever gonna come up with a book, or a painting, or a symphony, or a sculpture that can compete with a great city. You can’t. Because you look around and every street, every boulevard, is its own special art form …For all we know, Paris is the hottest spot in the universe.

Gil and Ines – engaged couple travel to Paris along with Ines’s parets’ business trip. Gil is a romantic character who is a Hollywood writer working on his first novel which is about to drag him into a few adventures midnights in Paris.. After his last trip to Paris he makes is mind to leave his life in America and live in Paris as a writer. However, Ines is intent on living in Malibu. Her utmost materialistic character is utterly different from Gil’s and she doesn’t come up with his romantic notions. (By the way, after the “Wedding Crashers”, it’s the second movie Rachel and Owen Wilson starring together). One night, Ines goes to dance with her pedantic friend Paul and while Gil walking alone back to hotel, a “Nostalgic” car pick him up and takes him to 1920s- Hemingway’s, Picasso’s, Fitsgerald’s times- the Golden Age as for Gil. That was the turning point in his life and a great experience giving inspiration for his novel!

I did admire Woody Allen just because how masterly he created every historical character, chose the best appropriate actors and stressed the least details of them. Hemingway’s (Corey Stroll) self-confident and macho style, his don juan treat with women, attendance in world war I, Picasso’s passionate way of describing woman on his portraits, Scott Fitsgerald’s (Tom Hissleston) love for his wife and poems, Gertrud Stein’s (Kathy Bates) strict and manlike character (she was lesbian), Salvador Dali’s unusual vivid imagination and surrealistic ideas, which was the most funniest one for me! :) Noone could ever play this role as Adrien Brody did.

No need for me write that much, each character has described themselves. So…

Ernest Hemingway:   Pablo thinks women are only to sleep with or to paint.

Adriana-  (played by a real French beauty Marion Cotillard) Extemely beautiful young lady who came to Paris to study fashion with Coco Shanel, dated with Amadeo Modigliani, Pablo Picasso. When Gil transported to 1920s, he met Adriana as Picasso’s girlfriend who used to be an inspiration and passion object for his portraits. Gil likes her and almost is drawn to her. As he is in love with a woman in different era and being engaged with another woman in his present, he is in perplexed situation. When he expained this confusion to Dali and his friends Man Ray, Luis Bunuel, they accept it quite normally, bcs they are surrealists. This dialogue jollied me up :)

Man Ray: A man in love with a woman from a different era. I see a photograph!
Luis Buñuel: I see a film!
Gil: I see insurmountable problem!
Salvador Dalí: I see rhinoceros! 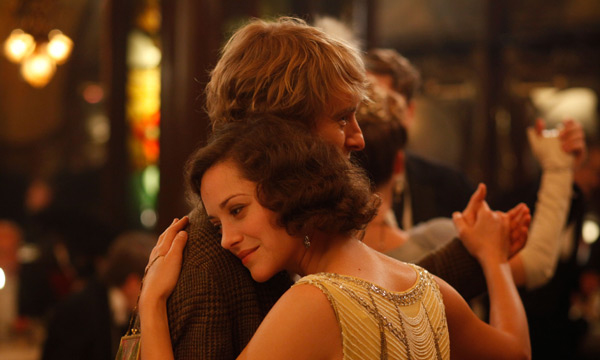 When Adriana leaves Picasso and goes with Hemingway, Gil finds her diary from the 1920s and finds out that she was in love with him. Gil transports back to see Adriana, as meet a courage takes them to  1890s Belle Époque. The era of Maxim’s Paris, which Adriana always talks about as Golden Age (L‘Age d’Or). I guess, it’s really the Golden Age if the music, theater, fahion, street lights are has been as splendid and mystic as described in the movie!!! I think, I was born too late…

Once, while Ines was shopping and ignoring Gil, he knows a antic salor Parisian girl- Gabriela, who has the same interests/ taste with him. Ines, Adriana or Gabrila. These 3 women take very important parts in Gil’s life. Who will he choose?…Watch the movie! :)

The ending is very fair and can be considered as “Happy End”. Gil finally can figure out some realities, be successful in his novel and….:)

Gil:      …But I’m from the ’20s, and I’m telling you the golden age is La Belle Époque. And look at these guys. I mean, to them, their golden age was the Renaissance. …Adriana, if you stay here, and this becomes your present, then, pretty soon, you’ll start imagining another time was really your, you know, was really the golden time. That’s what the present is. That it’s a little unsatisfying, because life’s a little unsatisfying.

The moral I got from the movei was: “Wish! Follow your dreams..no matter who tries to drag you back and disappoint you, your wishes will slide you directly into them!”

The movie is full of french expressions :)

Combien, monsieur? (How much, sir?)

Mais pourquoi? (But why?)

Google about Hemingway, Picasso, Menot (his waterliles) , Dali. Then, you will find the replics more funny!

Find the soundtrancks and quotes from the  movie!